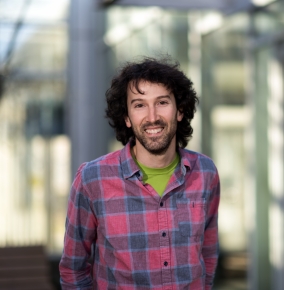 The Laboratory is full of people smarter than me. I love being able to learn from colleagues and come up with creative, collaborative designs that I'm sure I wouldn't have been able to get to alone.

Ben Buck plans for failure. As a spaceflight hardware designer at the Laboratory, he anticipates problems that could occur when the equipment is in space, where physical testing or maintenance are impossible.

"Spaceflight designs are never straightforward. There is always some unforeseen factor to consider, something more you can do to reduce risk, or some new creative spin you can put on your design to improve performance," Ben says.

Before joining the Laboratory in 2014, Ben worked at the MIT Bates Research and Engineering Center, part of the MIT Laboratory for Nuclear Science. He designed particle detectors and electronics used for physics experiments in particle colliders. His experience with particle detection in high-radiation environments made him a natural fit for designing spaceflight hardware, which faces the risk of damage from radiation.

Ben's first job at the Laboratory was designing the camera for SensorSat, a satellite developed and built by the Laboratory and launched in August 2017 on a 3-year mission to continually image objects in the geosynchronous belt, located about 22,370 miles above Earth. Being part of the program's entire development cycle, from design to build to test, then inspection and finally, delivery, meant Ben's days were filled with different tasks. "The job changes a lot day to day depending on where you are in the program," Ben says. Now that SensorSat has successfully started its mission of keeping an eye on the movements of satellites and space debris, Ben looks forward to troubleshooting potential problems in other spacecraft being developed at the Laboratory.

"It is an exciting time in space right now. Because space is more accessible than ever, to both us and our adversaries, there are more opportunities and challenges for the Laboratory to tackle," Ben says.