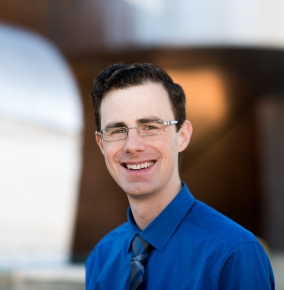 The opportunity to engage, educate, and inspire the next generation of engineers is refreshing for me, and I deeply appreciate that it's so tightly coupled into the definition of what Lincoln Laboratory is as an institution.

A project that percolated from David's curiosity about electricity in clouds led to a job offer from Lincoln Laboratory. The story begins first in a basement in Colorado then on a houseboat in California, where with help from friends, David worked nights and weekends to develop an instrument that measures the electric field in a cloud. Flown into a cloud on a weather balloon, this 5.5-pound instrument would collect data for determining if a cloud might produce lightning and be a threat to aircraft. This eight-year project led to David's founding a nonprofit organization to develop his new concept and to demonstrate applied science, like his balloon-carried model, to high school students. A staff member from Lincoln Laboratory discovered David's invention at the nonprofit's website, and after email conversations to learn about the instrument's components, which he thought might apply to a system he was developing, he suggested David send his resume to the Laboratory. "When MIT says, 'Consider joining us,' who wouldn't?" David asks.

His hobby has become one of the prototype systems he works on at the Laboratory, and in October 2017, he and a team successfully flight-tested the prototype, BEACON*, at the National Storm Systems Laboratory in Oklahoma. Now that David has joined the Laboratory, he continues to share his knowledge with young people, teaching high school students at the Laboratory's two-week summer workshop on building a small, fully operational radar. "Getting to share my love of engineering and science with students — and watching their growth — is awesome."