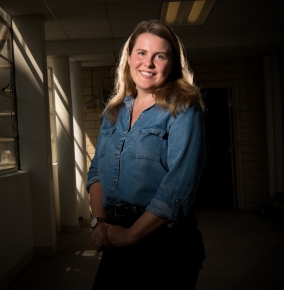 I’m doing research and theoretical work that I felt were missing during my industry internships.

As a member of MIT Sailing, Alice Lee can sometimes be found amongst the waves of Boston Harbor. She has only a little experience with sailing. "I really want to work on efficiently getting from point A to point B," she says.

In her career, she's done just that. Only nearly a year ago, she was on a bus striking up a conversation with a fellow rider who happened to be computer science graduate of Tufts University like herself. This rider described her job at Lincoln Laboratory solving pressing cybersecurity challenges for the nation. Alice felt driven to apply. "Software engineers still struggle with cybersecurity when it comes to protecting important private data like financial and health records," Alice says, "and despite those shortcomings, we are moving onto much more dangerous networked devices like cars, using many of the same development techniques that have failed in the past."

Today, Alice works on securing software used for satellites. She is currently researching and working on a process called formal verification, which is a method to prove software is free of large classes of bugs. Working in this area of cybersecurity is a "perfect crossover," Alice says, with her deep knowledge of programming languages that were a focus of her college career. She has already given a presentation of this work to her program’s sponsor, a task typically performed by staff members with more seniority.

Outside of work, Alice volunteers with the Girls Who Build program that encourages high school girls to tackle engineering problems. She likes that the program focuses on fields seemingly unrelated to engineering (the most recent event was based on music) and draws connections in fun ways. "I know how influential similar programs at MIT were for me as a girl," Alice says.