Location:
Westford, Massachusetts
Topic:
radar
R&D Area:
R&D Group:
Lincoln Laboratory operates a suite of radars to collect data that provides the U.S. military with space situational awareness and to obtain measurements that our researchers use to develop new systems for space surveillance. 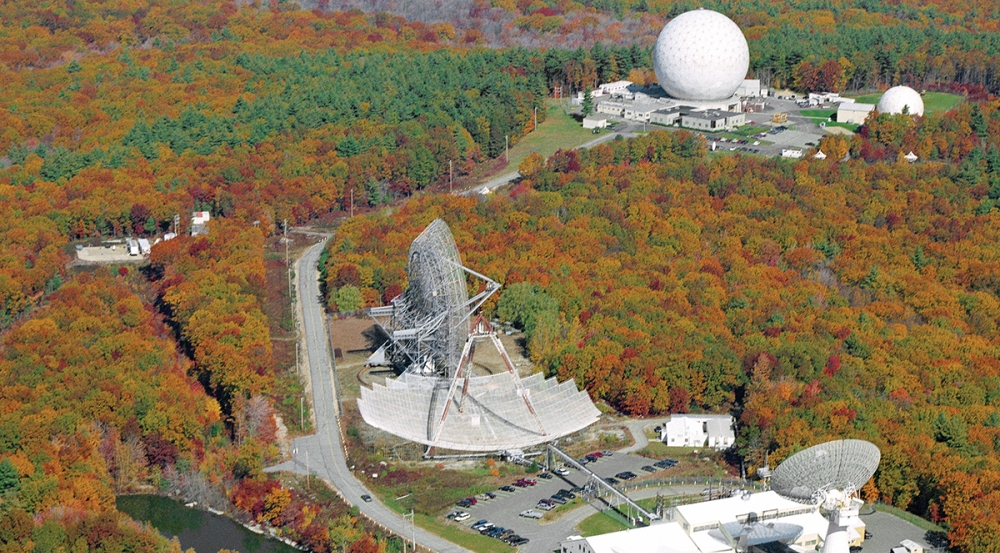 The Millstone Hill Radar is used for tracking space vehicles and space debris. This radar has been operating since 1957, when it successfully detected the Soviet Sputnik I satellite. It is a contributing sensor in the U.S. Space Surveillance Network, a network of optical and radar sensors that detect, track, and characterize objects orbiting Earth, and as such, the Millstone Hill Radar plays a key role in the national deep-space surveillance program. The high-power, L-band Millstone Hill sensor provides approximately 18,000 deep-space satellite tracks per year. It supports almost all U.S. deep-space satellite launches with data for premission planning and with radar coverage of activity in space that might impact the launches. It is also used for atmospheric science investigations.

The Haystack Ultrawideband Satellite Imaging Radar (HUSIR) was originally the X-band Haystack sensor, but in 2014 Lincoln Laboratory completed the transformation of this single-band system into a dual-band radar. HUSIR is now the highest-resolution, long-range sensor in the world, simultaneously generating X- and W-band images that help U.S. researchers better determine the size, shape, orientation, and motion of objects orbiting Earth. This upgrade to W-band operation required the development and construction of a new 120-foot-diameter antenna.

HUSIR is another of the sensors in the U.S. Space Surveillance Network. It also collects data to assist NASA in developing models of orbital space debris. The precisely aligned surface of HUSIR's antenna makes this radar a valuable instrument for radio astronomy. MIT Haystack Observatory uses HUSIR as a radio telescope to conduct single-dish radio astronomy and very-long-baseline interferometry experiments.

The Haystack Auxiliary Radar (HAX) was built in 1993 by Lincoln Laboratory to augment satellite imaging and space-debris data collections. This Ku-band radar equipped with a 40-foot antenna is in the smaller of the radomes at the left. The combination of HUSIR, in the larger radome, and HAX provides year-round availability for the collection of imagery for the U.S. Strategic Command's needs.

The MIT Haystack Observatory is located adjacent to the Lincoln Space Surveillance Complex, and the observatory utilizes some of these radars for its scientific research.