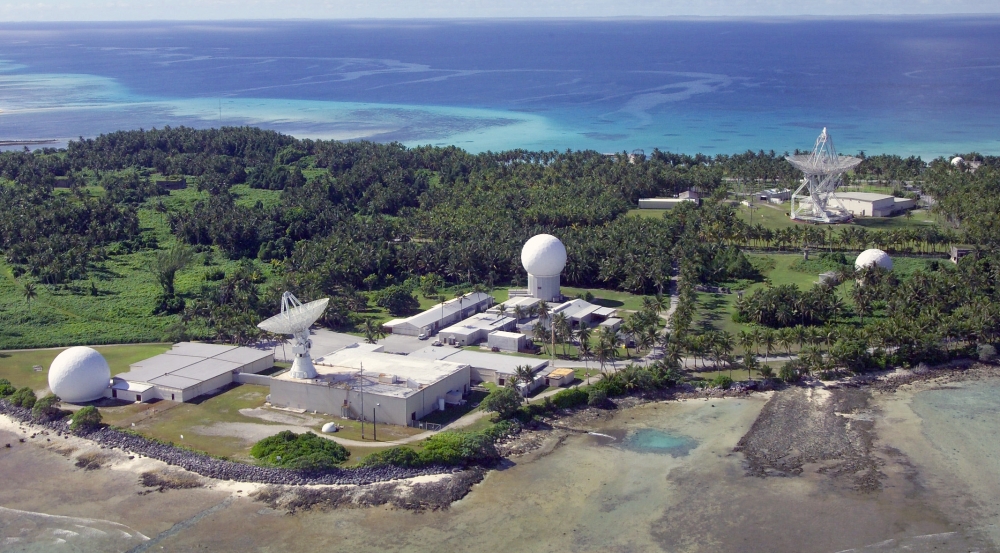 The U.S. Army’s Reagan Test Site (RTS), located approximately 2,300 miles west southwest of Hawaii on Kwajalein Atoll in the Marshall Islands, is a world-class range and test facility. In operation for nearly 60 years, RTS is ideal for missile and interceptor testing because of its distance from populous areas and its open-ocean line from launch facilities at Vandenberg Air Force Base in California, the Pacific Spaceport Complex in Alaska, the Pacific Missile Range Facility in Hawaii, and Wake Island in the western Pacific. The site’s unique instrumentation systems, including high-fidelity metric signature radars and optical sensors, support the research, development, testing, and evaluation of technology for long-range missile testing, missile defense, and space domain awareness. Each year, Department of Defense agencies execute many tests to study the flight characteristics and capabilities of missiles, interceptors, and satellites, and to verify their functionality, efficiency, and reliability.

Lincoln Laboratory, as the scientific advisor to RTS, supports operations at the range and conducts upgrades to the sensors and command-and-control infrastructure. A resident team of Laboratory staff and government contractors operates the radars located at the Kiernan Reentry Measurements Site on Roi-Namur Island on Kwajalein Atoll. About 15 Laboratory personnel are stationed on Kwajalein Atoll at any given time, serving 2- to 10-year tours before returning to the Laboratory.

The Laboratory’s involvement on Kwajalein Atoll began in the early 1960s, when the newly formed Advanced Research Projects Agency (ARPA, the predecessor of DARPA) designated the Laboratory as the scientific director of Project PRESS (Pacific Range Electromagnetic Signature Studies) to develop instrumentation and characterize the flight tests of newly developed long-range missiles and strategic missile defense systems. The Laboratory selected the island of Roi-Namur on the Pacific Kwajalein Atoll as an ideal location to build this instrumentation because its remoteness from land and populated areas enabled a safe testing environment. Over the years, the Laboratory led the design and construction of several radars and optical systems on Kwajalein Atoll and has led numerous upgrades to these systems and their command and control to meet evolving Department of Defense mission priorities.

The Target Resolution and Discrimination Experiment (TRADEX) system was the first of the radars to be built at Kwajalein for Project PRESS. The radar became operational in 1962, the same year the first Lincoln Laboratory staff arrived to live on Kwajalein Island. Early on, TRADEX was used to track and collect data on missiles for test missions. An upgrade to the radar in 1995 enabled TRADEX to assess the space debris population at low latitudes. This mode was used to collect space debris data for NASA. In 1998, TRADEX became a contributing sensor to the U.S. Space Surveillance Network, with a primary focus on tracking foreign launches, deep-space satellites, and low-Earth-orbit satellites. TRADEX currently operates for the space surveillance mission for 104 hours a week.

The second of the RTS radars, the ARPA Long-Range Tracking and Instrumentation Radar (ALTAIR), became operational in 1969. ALTAIR was primarily designed to give the United States a view of how U.S. intercontinental ballistic missiles would appear to Soviet anti-ballistic-missile radars. In 1998, ALTAIR and TRADEX were used to make first-of-their-kind measurements of the Perseid and Leonid meteor showers to understand how meteors could impact spacecraft. ALTAIR joined the Space Surveillance Network in 1982. Like TRADEX, ALTAIR is responsible for tracking foreign launches and near-Earth-orbit and deep-space satellites. Today, ALTAIR dedicates 104 hours per week to the space surveillance mission.

A year after ALTAIR, the ARPA Lincoln C-band Observables Radar (ALCOR) became operational. It was the first high-power microwave radar to utilize wideband waveform transmissions. ALCOR was built with the objective of being able to generate and process wide-bandwidth signals and to investigate the applications of broadband data for reentry vehicle discrimination and space situational awareness. Not only was ALCOR’s wideband capability effective for producing high-resolution data on missiles, but it also proved to be extremely useful for determining the size and shape of orbiting near-Earth satellites. ALCOR was eventually adapted to satellite imaging, leading to Lincoln Laboratory’s pioneering work in developing techniques and algorithms for generating and interpreting radar images. ALCOR currently operates for the space surveillance mission for 20 hours a week.

The Millimeter Wave (MMW) radar became operational in 1983 and was the last built radar at the RTS. The original charter for the MMW was to provide a database of millimeter-wave signature data of missile reentry phenomenology. Initially designed as an adjunct to ALCOR, the MMW has since grown to become a complete, self-sufficient system. The MMW has the best range resolution of the radars at Kwajalein and is capable of generating high-resolution images of near-Earth satellites. Over the years, the MMW went through a series of upgrades, including a component replacement effort in the early 1990s that enabled much higher transmitter power levels. Further upgrades in 2011 made the MMW the highest-resolution coherent instrumentation radar in operation, and the radar is now the second-highest-resolution long-range imaging radar, after the Lincoln Laboratory Haystack Ultra-wideband Satellite Imaging Radar was developed in 2014. The MMW currently operates for the space surveillance mission for 60 hours a week.

The Ground Based Radar-Prototype (GBR-P) became operational in 1997 as a prototype fire control radar of the Ground-based Midcourse Defense (GMD) system for the Missile Defense Agency. GBR-P is the only phased-array radar system located on Kwajalein Atoll and was originally designed for the surveillance, acquisition, tracking, discrimination, and fire control support of ballistic targets. GBR-P was the prototype for the Sea-Based X-Band Radar and operated as a GMD test asset for the development of ground-based interceptors until 2005, after which it was used sparingly as part of Missile Defense Agency testing operations at RTS. After the Missile Defense Agency transferred ownership of GBR-P to RTS in 2016, a variety of upgrades to the system began to modernize much of the backend architecture and system equipment to transform the existing system into an X-band instrumentation sensor to support RTS's various mission areas. These upgrades are ongoing.

Optical sensors play an important role at RTS and have a long history at the site, having worked alongside the Kiernan Reentry Measurements Site radars from the 1960s when film was used, to the present day in which an entire site can be operated remotely. Five Super RADOT (Recording Automatic Digital Optical Tracker) sites, dispersed throughout the Kwajalein Atoll for weather resiliency, make up the backbone of the RTS optics capabilities. At each Super RADOT site, a suite of high-resolution digital sensors in both the visible and infrared bands is paired with optical apertures ranging up to 24 inches on a two-axis gimbal mount. Each Super RADOT mount can be controlled with radar-pointing data through the Range Distributed Operations network to slew a 1,000-pound payload at 60 degrees per second over a continuous hemispherical range of coverage. These sites collect imagery for missile and space missions, providing signature data and the most accurate metric data for targets of interest at the range.