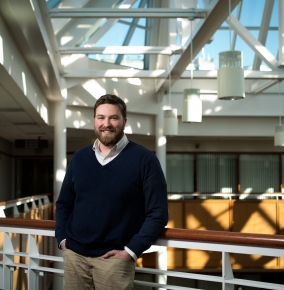 Work-life is great here. People are always willing to help each other out and work as a team.

Jeremy Chapman likes the Laboratory's fusion of both academia and industry — an atmosphere that encourages basic research but emphasizes building functional prototype systems. He appreciates that he can have time to investigate concepts and that his work testing GPS equipment is applied to fieldable systems. While the primary focus of this GPS testing is for a major Laboratory program to assess the survivability of U.S. Air Force aircraft, he has evaluated GPS receivers installed on satellites, vehicles, and cellphones. "Anybody at the Laboratory who is using a GPS in their system comes to us," Jeremy says of the staff in his GPS lab, adding that they have worked with project teams on systems for the Department of Defense (DoD), NASA, and the U.S. Department of Transportation (DOT). Recently on an assignment for the DoD and the DOT, he traveled to the White Sands Missile Range in New Mexico to test how GPS receivers might be affected by communicating over bands adjacent to the GPS spectrum. "We set up more than 100 receivers in an anechoic chamber big enough to house a few Humvees. It was quite a project."