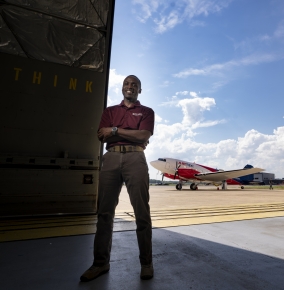 I tell students that probably 90% of success is being focused and willing to put in the work to get to your goal.

What drew you to a career as a test pilot?

I had been interested in airplanes from a young age. My father used to take me to airshows at the local military bases and I was hooked. When I was 13, I saw the movie “The Right Stuff,” which is where I first heard of the concept of a test pilot, and decided that’s what I wanted to be. So I started looking into how test pilots are made. It became obvious that I had to have two things: some sort of engineering degree and experience flying high performance airplanes. So I plotted a course to put myself on that path. I was fortunate enough to have very supportive parents who put me through flight school to start my flying experience. As a result, I had my private pilot’s license before my driver’s license. I had pretty good grades in high school, so when it came to deciding where to go to get the best engineering education, MIT was the first choice. After earning SB and SM degrees in Course 16 (Aeronautics and Astronautics), I decided it was time to expand my aviation experience. I joined the Air Force, became an officer and fighter pilot, and eventually graduated from the USAF Test Pilot School. Just like MIT, the USAF was the best place for me to be to reach my goal. However, the time I spent at MIT and in the USAF was not just “checking the box” to reach a goal. I wouldn’t trade a day I spent on campus or serving in the military for a one million bucks. All of those experiences, good and bad, have made me the person I am today.

What drew you to Lincoln Laboratory?

After 11 years in the USAF, I got to the point where I either had to pursue the senior leadership track or separate from the service. I decided to leave the service and pursue a career path that allowed me to continue to use my technical skills and experience. I worked at Aurora Flight Sciences for a decade, conducting developmental flight tests on unmanned and optionally piloted aircraft systems. When a Lincoln Laboratory flight test position was advertised, I jumped on the opportunity. The chance to fly a variety of modified aircraft was an obvious draw, but more important was the ability to use my skills and experience to help resolve issues of national interest. I found that purpose to be more motivating than increasing company sales or stock price.

I love that I can bounce between being the “geeky engineer” and the “cool test pilot.” The Lab’s divisions are continuously developing new communications, radar, imaging, tracking hardware and/or software systems that require airborne experiments. I can put on my engineering hat and help the technical staff pick the right aircraft, design the required modifications, and plan flight profiles for the experiment. Then, I get to put on my test pilot hat and go fly the plan.

Are you engaged in any of the Laboratory's community groups?

As a member of Lincoln Employees’ African American Network (LEAN), I have been involved in outreach activities to demonstrate to middle and high school students, particularly underrepresented minority students, that STEM is an option. As an MIT alumnus, I also provide volunteer mentoring to undergraduate and graduate students through the Office of Minority Education.