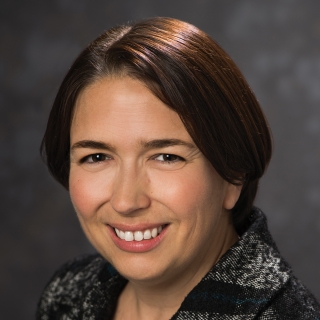 Dr. Katherine A. Rink is the Head of the Air, Missile, and Maritime Defense Technology Division at MIT Lincoln Laboratory. Prior to her appointment as the Division Head, Rink served as the Associate Division Head.

After joining Lincoln Laboratory in 1999 as a technical staff member in the Systems Engineering and Analysis Group, she worked on many technical aspects of the then-emerging Aegis ballistic missile defense system. In July 2005, she became an Assistant Leader of the Missile Defense Elements Group, and in November 2007, she was promoted to Associate Leader of the Air Defense Techniques Group, which was focusing on the integration of advanced air and missile defense capabilities for the U.S. Navy. In 2012, she was named the Leader of the Advanced Concepts and Technologies Group.

Rink is a member of the Naval Studies Board under the National Academies of Science, Engineering, and Medicine. She is also a member of IEEE and the Society of Women Engineers, and a senior member of the AIAA. She holds a BS degree in systems science and mathematics, a BA degree in mathematics and German, and MS and DSc degrees in systems science and mathematics, all from Washington University in St. Louis. She also earned an MS degree in operations research from Columbia University.