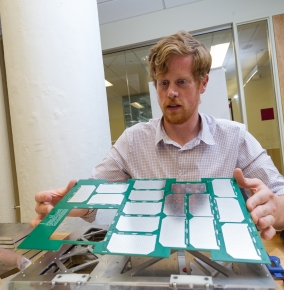 So many dedicated individuals here put their work above themselves and do their best to do the job right. I am always impressed by the sense of purpose everyone has at the Lab.

In 2009, as an MIT undergraduate, Brent interned in Lincoln Laboratory's summer research program, developing high-fidelity models for the drag forces on satellites in low Earth orbit. This work led to a post-graduate job offer here and eventually evolved into the research for the master's thesis he wrote while also working as a member of the Lab's technical staff. Brent has become somewhat of a go-to person at the Lab for questions about the orbital dynamics of atmospheric drag on satellites. Under a Laboratory tuition fellowship program, he is studying for a doctorate in electrical engineering at Boston University (BU). His thesis is tailored to the research on space weather he is doing in the Laboratory's Space Systems and Technology Division. At BU's Center for Space Physics, he is putting the teaming skills he uses at the Laboratory into his role as the program manager for the development of a cubesat, a miniaturized satellite, that is designed to deploy a swarm of magnetometers to measure the electromagnetic currents of the auroral regions — commonly called the Northern and Southern Lights. He is excited that this cubesat ANDESITE has been chosen for a 2018 launch through NASA's Educational Launch of Nanosatellites program. He hopes the data collected by ANDESITE will not only expand scientists' understanding of auroral currents but may also support the Laboratory's development of space systems that are resilient to the effects of space weather.