Topic:
space
R&D area:
R&D group:
A new planet hunter will spend the next two years searching for exoplanets, including those that could support life. 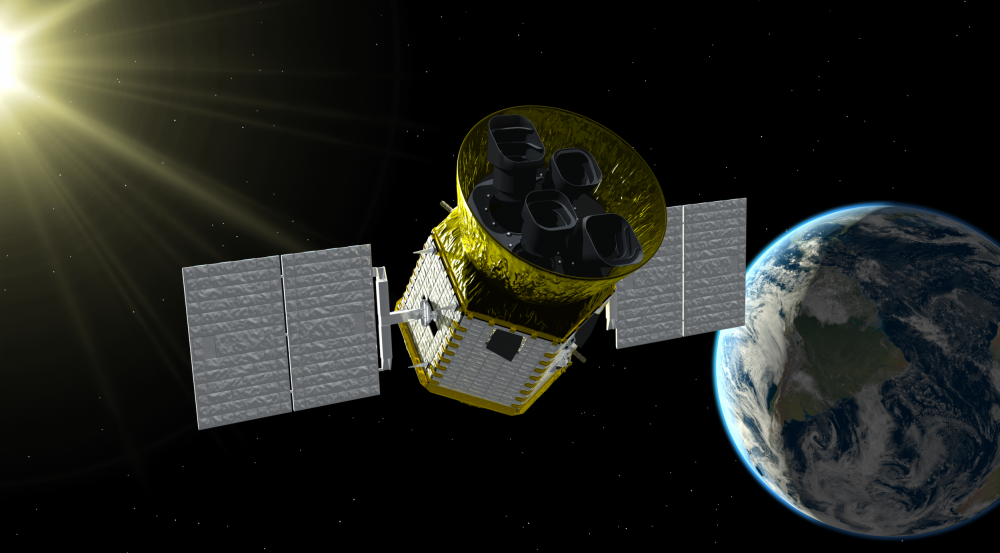 TESS's cameras, which will monitor planets passing in front of stars, were designed and built by Lincoln Laboratory engineers. Illustration: Chester Beals

A pressing question of modern science is whether there is life on planets other than Earth. Lincoln Laboratory staff are involved in a project that may bring us one step closer to the answer. In 2013, NASA selected the Transiting Exoplanet Survey Satellite (TESS) project, led by principal investigator George Ricker of the MIT Kavli Institute for Astrophysics and Space Research with support from Lincoln Laboratory, NASA, and others, to receive funding and approval for launch.

In the first mission of its kind, TESS will spend two years hunting for and cataloging thousands of exoplanets, or planets orbiting stars beyond our solar system. TESS detects exoplanets by looking for dips in a star's brightness caused by a transiting planet momentarily eclipsing the star. The mission relies on powerful wide-field cameras that will stare into more than 200,000 stars across the entire sky. These cameras, developed by Laboratory researchers, are capable of looking at stars 30 to 100 times brighter than those observed by TESS's predecessors, the Kepler and K2 missions.

Once TESS compiles a catalog of exoplanets, ground- and space-based follow-up observations will determine the atmospheric compositions of the planets. The analyses can even identify planets with conditions favorable for supporting life. The mission launched in April 2018.

How did black holes shape the cosmos? Fast, low-noise X-ray sensors may provide the answer

Tiny satellites could help warn of the next big hurricane

What could we do with a 20-meter tower on the Lunar South Pole? Applications of the Multifunctional Expandable Lunar Lite & Tall Tower (MELLTT)