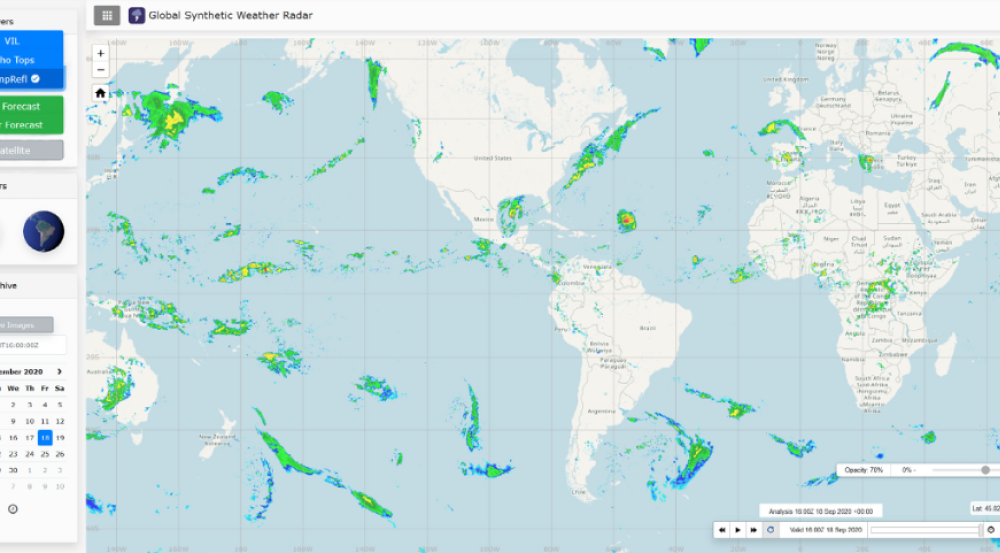 Many areas around the world lack radar-based weather forecasts either because radar systems are not deployed over the region or because the regional ground-based systems are limited in range. This lack of coverage is problematic for services and industries that rely on weather forecasts for planning their activities—for example, aviation, natural resource management, and agriculture.

The Global Synthetic Weather Radar (GWSR) leverages machine learning techniques to generate synthetic weather radar images for locations where there is no actual weather radar coverage. Using a technique known as image-to-image translation, the GSWR transforms a combination of lightning data, satellite imagery, and numerical weather outputs into a radar-like image. Observations collected by satellite-based radar systems over many years were used to train the model for the GSWR algorithm that implements this transformation. The GSWR model synthesizes data from 15 sectors around the world and mosaics the results into one global radar-like picture.

From the GSWR display, users can select which weather products to view: storm height (echo top), storm intensity, or cloud coverage. They can also choose to view either a real-time analysis of weather conditions or a synthetic weather radar forecast going out 12 hours into the future. The display updates GSWR’s 3-hour forecast every 15 minutes and its 12-hour forecast every 60 minutes with the latest data available.