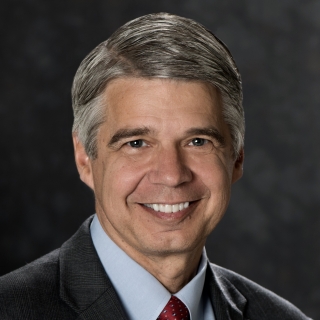 Dr. Eric D. Evans is the Director of MIT Lincoln Laboratory, a multidisciplinary Federally Funded Research and Development Center (FFRDC) run by the Massachusetts Institute of Technology for the Department of Defense. As Director, he is responsible for the Laboratory's strategic direction and overall technical and administrative operations.

The Laboratory focuses on advanced technology development and system prototyping for national security needs. Laboratory-sponsored programs include work for the military services and other government agencies, such as the Defense Advanced Research Projects Agency (DARPA), National Oceanic and Atmospheric Administration (NOAA), National Aeronautics and Space Administration (NASA), and the Federal Aviation Administration (FAA). The Laboratory has 3800 employees whose backgrounds include electrical engineering, physics, mathematics, and computer science.

Dr. Evans is currently the chair of the Defense Science Board (DSB). As a member of the DSB since 2009, he has served on several studies, including as co-leader of Task Forces on Improvised Explosive Devices and Cyber Security, and Reliability in a Digital Cloud. He has been an advisor to the U.S. Strategic Command Senior Advisory Group and a member of the Massport Security Advisory Council. From 2012 to 2018, he was the Chair of the Board of Directors for the National GEM Consortium, an organization that provides fellowships to underrepresented minorities pursuing graduate degrees in science, technology, engineering, and mathematics (STEM) fields. He previously served as a member of the Los Alamos and Lawrence Livermore National Laboratory Nuclear Mission Committee.

From 1999 through 2006, Dr. Evans was the Division Head of Lincoln Laboratory's Air and Missile Defense Technology Division. He was responsible for programs associated with air and missile defense architectures, sensor technology, automatic target recognition, open systems architectures, and measurements at the Reagan Test Site in the Marshall Islands.

Prior to 1999, Dr. Evans was the Group Leader of the Laboratory's Air Defense Techniques Group, where he was responsible for Navy programs related to area air defense, ship self-defense, and overland cruise missile defense. He led efforts in E-2C radar modernization, including new antenna, digital receiver, and signal processor development. His group worked to incorporate advanced E-2C capability into the Navy's Mountaintop program for air-directed surface-to-air missile system development. Dr. Evans was also responsible for Laboratory efforts to improve the Aegis AN/SPY-1 radar and Standard Missile with new processors and advanced signal processing.

Dr. Evans is a Fellow of the IEEE, a Fellow of the AIAA, and a member of the National Academy of Engineering. He is the author of more than 50 journal and conference publications. In 1996, he and his coauthors received the M. Barry Carlton Award from the IEEE Aerospace and Electronics Systems Society for a paper on advanced radar signal processing. Dr. Evans holds BS, MS, and PhD degrees in electrical engineering from The Ohio State University.