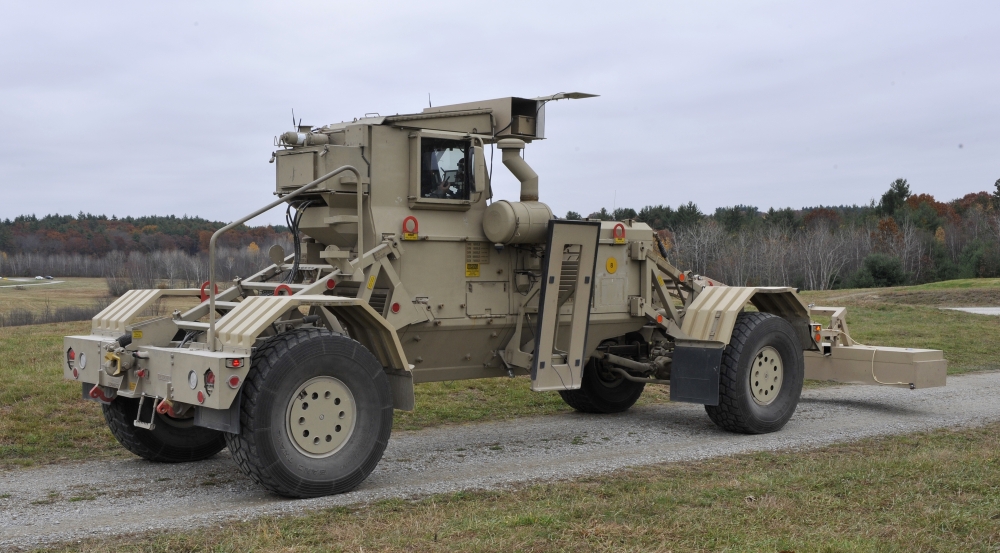 The Husky Mark III vehicle was deployed to Afghanistan for operational evaluation of the GPR's ability to find buried devices.

A team from Lincoln Laboratory developed a new type of ground-penetrating radar (GPR) to detect deeply buried improvised explosive devices from mobile vehicles. Using the RF reflections from materials and objects beneath the ground, our GPR creates a detailed map of subsurface objects at depths of several meters. The team integrated the GPR sensor onto four Husky Mark III military vehicles, two of which deployed to Afghanistan for operational evaluation.

In addition to locating buried objects, we were able to use the subsurface map to very accurately derive the position of a Husky equipped with our GPR system. By associating prior baseline data acquired from a first drive over a route with data from subsequent travel of that route, the GPR could determine a vehicle's location. Because the underground environment, thus its map, changes very slowly over a long time, adding a GPR system to the suite of sensors on autonomous vehicles can improve the navigational accuracy of self-driving vehicles in weather conditions like snow and fog that can obstruct sensors that geolocate on aboveground lane markings and landmarks. We developed and demonstrated an autopilot built with the GPR technology, first on the Husky military vehicles and later on commercial vehicles. A startup has spun out of the Laboratory to commercialize this technology.

Three from MIT are named 2020 Fellows of the IEEE

Radar coverage analysis for the Terminal Precipitation on the Glass Program

The need for spectrum and the impact on weather observations

Towards the next generation operational meteorological radar