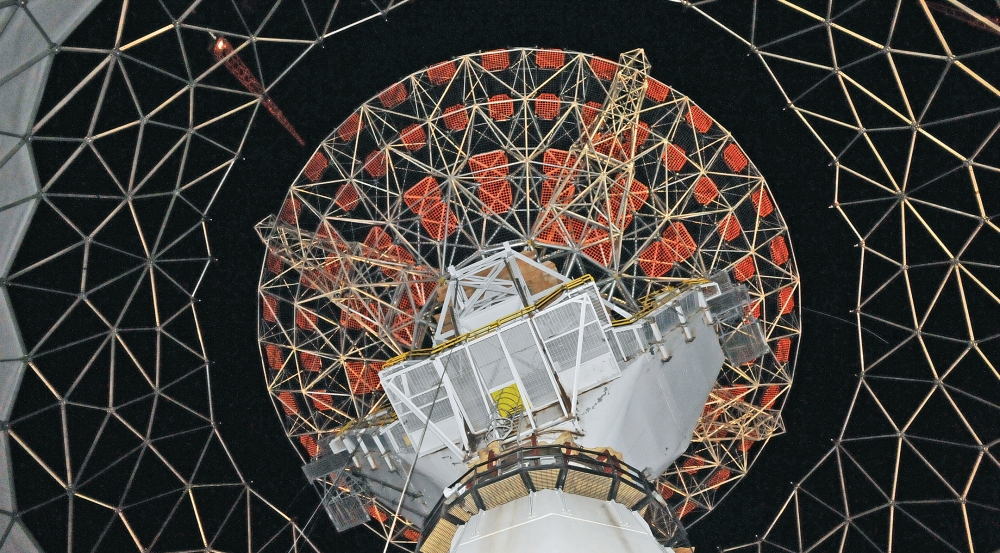 The newly installed HUSIR antenna is seen against the backdrop of the night sky before the radar's radome is reassembled to enclose the system.

In 2013, a large team of researchers and engineers at Lincoln Laboratory, working with outside construction companies, completed a major upgrade to the Haystack radar system in Westford, Massachusetts. Originally built in the 1960s as a research test bed, the Haystack radar became a contributing sensor to the U.S. Space Surveillance Network in1979, when the system was advanced to enable long-range imaging. Through a 10-year development, the Laboratory's team added a millimeter-wave W-band radar capability to Haystack's X-band sensor, making this new dual-band system, the Haystack Ultrawideband Satellite Imaging Radar (HUSIR), the highest-resolution, long-range sensor in the world.

HUSIR's ability to simultaneously generate X- and W-band images enables it to provide groundbreaking data about the size, shape, orientation, and motion of objects orbiting Earth. In addition, HUSIR can characterize individual components of large, complex objects and can distinguish small objects from each other. These advanced capabilities are supplying data for improving the space situational awareness necessary for the United States to help the world safeguard a space environment that is increasingly congested with active and defunct commercial and military satellites, as well as an assortment of space debris, such as remnants of damaged spacecraft and spent rocket boosters.

Achieving HUSIR's W-band capability required the development and construction of a completely new 120-foot-diameter antenna and the design of a control system to point the antenna and track a satellite with 0.0005-degree accuracy. The Laboratory team developing HUSIR innovated several solutions to technical problems. Because HUSIR's bandwidth and sensitivity requirements could not be met with transmitter amplifiers commercially available at the project's start, our researchers, in partnership with a commercial supplier, created a custom amplifier. To accommodate the separate signal processing chains required for simultaneous dual-band operation, we made significant advancements to signal processing hardware and algorithms. We also designed a new higher-frequency, wider bandwidth waveform generator for HUSIR. The technology developments that HUSIR represents were recognized in 2014 with an R&D 100 Award for outstanding technical innovation.

HUSIR officially joined the Space Surveillance Network in January 2014. Our staff continue to task HUSIR to identify and characterize space objects. In addition, because the HUSIR antenna accommodates scientific instruments, the system is used by the MIT Haystack Observatory as a radio telescope on a time-available basis.

For an in-depth look at the HUSIR development, construction, and capabilities see our Lincoln Laboratory Journal special issue commemorating the Haystack facility's 50 years of operation.